August 6 was the one-year anniversary of the fire at the Chevron Richmond refinery.  A pipeline rupture started a massive fire, with a toxic plume of smoke that caused respiratory problems for over 15,000 people.  The anniversary was marked by a march and sit-in at the refinery, in remembrance of the fire and in protest of Chevron's participation in tar sands extraction and the construction of the Keystone XL pipeline. 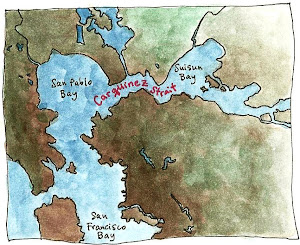